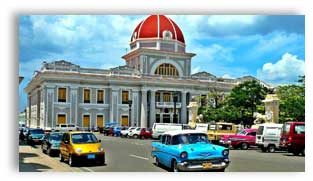 Cienfuegos also known by La Perla del Sur (the Pearl of the South) or la Linda Ciudad del Mar (the beautiful City of the See), it was founded in 1819 by the French as Fernandina de Jagua, an attractive city erected with coasts to the Caribbean Sea and a bay coveted since ancient times by settlers, pirates and privateers .

Cienfuegos is an elegant discourse of tradition and modernity that constantly dialogue with the sea, which it is proud of its environment preserved, moreover, that nuance of identity that reveals how cute is La Ciudad del Mar, unique of its kind in Cuba, founded by the French, in adittion of that it is rich in palaces, theaters,

churches, the city offers a nautical potential, a history and a culture that allows you to venture into the tourism industry as a peculiar product whose incentives will not disappoint those who make a brief pause to know it.

It is characterized by its natural beauty and cultural wealth of its buildings, the toilet in general condition and the cleaning of the streets in particular, its tranquility as well as wealth preservation of its housing stock, but especially by the rectilinear layout of its streets, typical of the neoclassic geometric systems.

Its architectural values ​​that motivated during the 29th session of World Heritage Committee of UNESCO, held in Dubain, South Africa on July 15th, 2005, it was awarded his condition of Historic Center  Cultural Heritage.

Historical Center.
Urban Historical Center, only the twentieth century, declared National Monument for its architectural and heritage values. This is a beautiful place  which shows its Central Square Jose Marti ,in this area you can appreciate the prevailing neoclassical and French influence which typify the facades, arches, stained glass and bars.

From the first 24 blocks of what would be the urban center of the village Fernandina de Jagua were drawn. In its surroundings, the Government House, the Cathedral, the house of the founder of the city, San Lorenzo School, the Teatro Tomas Ferry, the Ferrer Palace and the Provincial Museum and other historical architectural works is located. Located from 25 th to 29 th street, and  from 54 th  to 56 th avenue..

Eclectic style, it is located in the historical center of the city. It was erected in 1918. Enrico Caruso was one of his illustrious guest. Currently it is the house of culture. Located on 24 th street and 54 th avenue.

It was built in 1819, today it holds the condition of National Monument. It is of great beauty by the profusion of allegorical French windows to the Twelve Apostles. Instead it was the first religious temple located in Cienfuegos. Located on 29 th Street and 56 th Avenue.

National Monument opened in 1890. It retains the splendor of its early days. Scenario which has trained notable figures Illyricum art and dance, including Enrico Caruso Italian tenor. Located on

Residence Don Luis de Clouet, founder of the city. Data from the first half of the nineteenth century, and it is one of the few domestic neoclassical architecture type. Located on 29 th Street and avenue 54 th.

Place where art and history are closely mixed. Located on 29 th Street and 56 th avenue.

The main artery of the city. It is extended from the entrance of the city to the Malecon. The longest of Cuba and it leads us to the residential area of ​​Punta Gorda, through the pleasant Malecon cienfueguero which offers a panoramic view of the Bay of Jagua and its surroundings

One of the most frequented sites in the city, in the Boulevard there are some important shopping and service centers. It corresponds to the pedestrian street  of the 54 th from the avenue 37 th to 29 th.

Cayo Loco. Old South Naval District Cuban Navy, it is dedicated to the history of the navy, it was the place where there was the historical revolutionary uprising of sailors and civilians on September 5th street, 1957.  Located on 21st street and 60th avenue

It cherishes the most authentic visual arts and folk art of the region. Located on 54th street between 25 th and 27 th avenue.

Edificacion that recalls the best of the nautical traditions of Cienfuegos and currently  it offers multiple possibilities. It was inaugurated on August 31st, 1920 as the host of the Yacht Club, a company renowned for its success in the order of water sports..

Twentieth century architectural jewel of eclectic style, it is considered Local Monument. It is the most representative work of the city. It harmonizes the mudajar and Byzantine styles with the Venetian, Gothic and Baroque. Located on Zero avenue and 37th street.

National monument and the first in the city. His way of burial in walls of niches it is the only preserved in Cuba of the colonial era. Located on 50th avenue on 7thstreet.

First field holy garden of Cuba. It has the status of a National Monument for its large sculptural and decorative values. Located on September 5th avenue.

Founded by Edwin Atkins in 1901 and sponsored by Harvard University, it is the third most important in all over the world in the category of tropical gardens. Hoards more than two thousand plant species including copies of five continents. It has collections of palmsand Picus. Located to 14 km from the city of Cienfuegos.

Exceptional landscape composed by impressive waterfalls, with waterfalls up to 15 meters, natural pools which are perfect for a bath, located in the municipality of Cumanayagua to 51 Km from the city of Cienfuegos. On this site you can enjoy a beautiful landscape between the Escambray mountains, hiking, caves and inhabited by a endemic flora and fauna.

Only in south central Cuba, it is located to 17 Km from the City of Cienfuegos, near the Faro Luna, Rancho Luna and Pasacaballo hotels. The opportunity of a bath is provided along with dolphins and you can enjoy a beautiful show with marine wolves and dolphins.

Accessible from all points, its depth, shelter and formidable commercial terms of its port, make it one of the most significant of Cuba. It offers exceptional view of the city of Cienfuegos, keys and coastline plus a panoramic view of the Fort of Our Lady of the Angels of Jagua (Fortaleza de Nuestra Señora de los angeles de Jagua).

National Monument. Cozy place where you can appreciate one of the most amazing views of Cienfuegos coast, it is located in the area known as El Castillo. The Strength of Our Lady of the Angels of Jagua was completed in 1745 at the entrance to the Bay of Jagua (Cienfuegos Bay) in order to protect it from raids by corsairs and pirates sailing the Caribbean. Located to 35 km from the city of Cienfuegos.

Nearby the capital there is a town with deep Afro-Cuban roots. It stands in that territory the Yoruba Panteon Municipal Museum. Located to 13 km northest of the city of Cienfuegos.